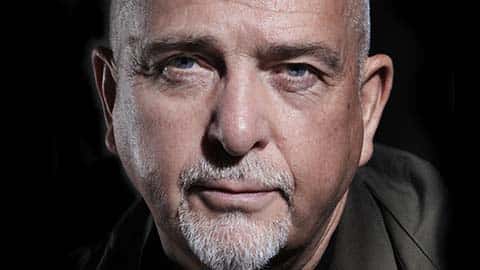 Gabriel’s first solo album was an eponymously titled effort, as were his next three. (The idea, he once explained, was to suggest issues, as one would for a magazine.) The first and second LPs drew attention for the respective singles “Solsbury Hill” and “D.I.Y.” The third, produced by Steve Lillywhite, yielded “Games Without Frontiers” (Number 48, 1980) and showed Gabriel striving to break rock conventions: For instance, drummers Jerry Marotta and Phil Collins (Gabriel’s former Genesis bandmate) were prohibited from using cymbals.

Gabriel’s fourth album, subtitled Security (1982), was the singer’s first to go gold; it also gave him his first Top Forty single with “Shock the Monkey.” That same year, Gabriel financed the World of Music, Arts, and Dance (WOMAD) Festival, designed to bring African and Far Eastern music – which had increasingly influenced his work – to Western ears. To offset the festival’s debt, he staged a Genesis reunion concert and released a WOMAD album, featuring cuts by himself, Robert Fripp (the producer of his second LP), and Pete Townshend alongside world-music sources. The WOMAD Festival became an annual event, and the organization eventually spawned an education program and record label.

In 1984 Gabriel was tapped to score Alan Parker’s film Birdy; the singer consequently won the Grand Jury Prize at Cannes. In 1985 he founded Real World Inc., aimed at developing cross-cultural projects in technology and the arts. The following year, he started the United Nations University for Peace, intended to fund an international human-rights computer network, and set up Real World Studios, a recording complex near Bath, England, where artists including Van Morrison and New Order have since worked. (A Real World record label, dedicated to exposing ethnic music from around the world, was established in 1989.)

In 1986, Gabriel released his commercial breakthrough. So, coproduced with Daniel Lanois. The album reached Number Two and produced the funky, chart-topping “Sledgehammer,” which Gabriel accompanied with a video full of provocative live-action-animation images. A video for “Big Time” (Number Eight, 1987) followed suit. Other singles included “In Your Eyes” (Number 26, 1986) and “Don’t Give Up” (Number 72, 1987), a duet with Kate Bush.

Gabriel joined U2, Sting, and others for a 1986 tour on behalf of Amnesty International. A 1988 Amnesty tour followed, with Gabriel, Sting, Bruce Springsteen, Tracy Chapman, and Youssou N’Dour (who had sung on So). Also in 1988, Gabriel performed “Biko,” his tribute to South African civil-rights martyr Steven Biko (from 1980’s Peter Gabriel) at a Nelson Mandela tribute at London’s Wembley Stadium, and composed music for Martin Scorsese’s controversial adaptation of The Last Temptation of Christ. The 1989 soundtrack album won a Grammy for Best New Age Performance.

Gabriel’s next studio album, 1992’s Us, was inspired by his mid-Eighties divorce from childhood sweetheart Jill Moore and the breakup of a subsequent relationship with actress Rosanna Arquette. The album reached Number Two and generated “Digging in the Dirt” (Number 52, 1992) and “Steam” (Number 32, 1992).

In 1993 Gabriel enlisted an international roster including Sinéad O’Connor, Crowded House, James, and P.M. Dawn for a WOMAD tour. The 1994 double CD Secret World Live was recorded during two Italian concerts in 1993. Also in 1994 the musician added another branch to his corporation, called Real World Multi Media, to use technology as another creative outlet. The division published its first CD-ROM, Xplora 1, an interactive look into Gabriel’s various projects, that year. A follow-up, Eve, featuring Gabriel’s music and the work of several visual artists, was released in 1997. The musician helped develop an attraction for the London Millennium Dome, which opened on New Year’s Day 2000; he also issued a soundtrack, OVO, for the attraction, which included a drawn storybook.

When Gabriel emerged from a nearly decade-long hiatus in 2002 with Up it was clear that his recording career had taken a back seat to his business and charity ventures. “Signal To Noise,” one of the album’s standout tracks, featured guest vocalist Nusrat Fateh Ali Khan —who died five years before the album came out. The lead single, “The Barry Williams Show,” was poking fun at outrageous talk shows in an era when reality programming had made “The Jerry Springer” show seem quite tame. More problematic was the fact that the large fan-base he cultivated in the 1980s and early 1990s had largely moved on, and the Up tour played to near-empty arenas in America. Those who stayed home missed a sensational in-the-round show in which Gabriel literally walked on the ceiling.

After the tour wrapped, Gabriel would pop up with an occasional contribution to a film soundtrack or an oldies tour of South America or Europe. In 2005, he came close to signing up for a lucrative Genesis reunion tour, but balked at the last minute. Instead, he began working on Scratch My Back, a collection of covers (Radiohead, Arcade Fire, Lou Reed, Paul Simon) recorded with synthesizers and orchestral instruments, but no guitars. A follow-up (Scratch Your Back) on which the artists cover Gabriel is planned for sometime in the future. Gabriel has also been working on a new disc of originals, tentatively called I/O, for nearly ten years.

Portions of this biography appeared in The Rolling Stone Encyclopedia of Rock & Roll (Simon & Schuster, 2001). Andy Greene contributed to this article.