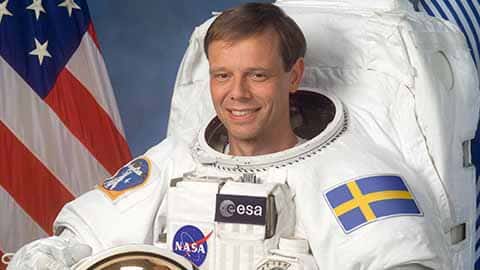 Born on 18 March 1957 in Stockholm, Sweden, Christer Fuglesang is married to the former Elisabeth Walldie; they have three children. Christer enjoys sports, sailing, skiing, reading and playing Frisbee and games.

Christer graduated from the Bromma Gymnasium, Stockholm in 1975 and received a Master of Science in engineering physics from the Royal Institute of Technology (KTH) based in Stockholm, in 1981. He received a doctorate in experimental particle physics in 1987 and became an associate professor in particle physics in 1991 at the University of Stockholm. He was appointed Affiliated Professor at KTH in 2006.

As a graduate student, Christer worked at the European Research Centre on Particle Physics (CERN) in Geneva on the UA5 experiment studying proton–antiproton collisions. In 1988, he became a Fellow of CERN, where he worked on the CPLEAR experiment studying the subtle CP-violation of Kaon particles. A year later, Christer became a Senior Fellow and head of the particle identification subdetector.

In November 1990, Fuglesang obtained a position at the Manne Siegbahn Institute of Physics, Stockholm, but remained at CERN for another year working on the Large Hadron Collider project. Since 1980, when he was based in Sweden, Christer has taught mathematics at the KTH Royal Institute of Technology.

In May 1992, Christer joined the ESA Astronaut Corps based at the European Astronaut Centre (EAC) in Cologne, Germany. He followed the introductory training programme at EAC and a four-week training programme at the Gagarin Cosmonaut Training Centre (GCTC) in Star City, Russia, as part of the ESA–Russian collaboration on the Mir space station. In July 1993, he completed basic training at EAC.

In May 1993, Christer and fellow ESA astronaut Thomas Reiter were selected for the EuroMir-95 mission and started training at GCTC to prepare for their flight engineer tasks, spacewalks and Soyuz spacecraft operations. In March 1995, Christer was selected as a member of Crew 2 for EuroMir-95, joining Gennadi Manakov and Pavel Vinogradov. The mission lasted from 3 September to 29 February 1996. Christer was the prime Crew Interface Coordinator working at the Russian Mission Control Centre in Kaliningrad, Russia.

Between March and June 1996, Christer followed specialised training on Soyuz operations for undocking, reentry and landing of the Russian spacecraft.

From May to October 1998, Christer resumed training at GCTC on Soyuz-TM spacecraft operations for undocking, reentry and landing. He was awarded the ‘Soyuz Return Commander’ certificate, qualifying him to command a three-person Soyuz capsule on its return from space.

In October 1998, he returned to NASA Johnson and was assigned to technical duties in NASA’s Astronaut Office. He worked with Russian spacecraft such as the Soyuz and Progress and then as Crew Support Astronaut for Expedition 2 to the International Space Station. Afterwards he worked on equipment for the International Space Station and on spacewalks.

Christer continued doing scientific work and was involved in the SilEye experiment that investigated flashes perceived in astronauts’ eyes on Mir between 1995 and 1999. The work continued on the International Space Station with the Alteino detector and the ALTEA facility. Christer also initiated the DESIRE Project that simulated and estimated radiation in the Space Station.

In May 2010, Christer took over as Head of Science and Application Division within the Directorate of Human Spaceflight and Operations at ESA’s technical heart, ESTEC, in the Netherlands.

From 9 to 22 December 2006, Christer Fuglesang flew as Mission Specialist on Space ShuttleDiscoveryfor STS-116 to the International Space Station. He became the first Swedish astronaut to fly in space. During his Celsius mission, Christer conducted three spacewalks. His tasks were to attach new hardware to the Station and to reconfigure the Station’s electrical power system. The unscheduled third spacewalk freed the Station’s jammed P6 solar array. His total spacewalk time during the mission was 18 hours 14 minutes.

Christer‘s second spaceflight lasted from 29 August to 12 September 2009. He was Mission Specialist on Space ShuttleDiscoveryfor STS-128 to the International Space Station. On this Alissé mission, Christer made two spacewalks, installing an ammonia tank and preparing for the installation of the European-built Node-3 module. He spent 13 hours and 40 minutes spacewalking, bringing his total time spent spacewalking to 31 hours and 54 minutes. Christer was also responsible for overseeing cargo transfers from the Leonardo Multi-Purpose Logistics Module that was brought to the Station inDiscovery. Christer also performed experiments and educational and public relations activities.