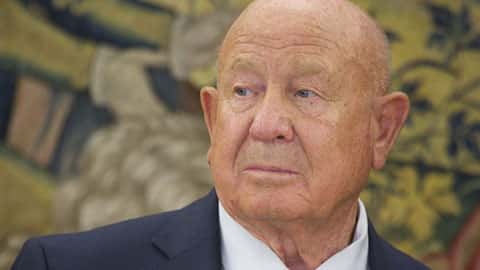 One of the first cosmonauts, Alexei Leonov trained with Yuri Gagarin. He gave the world a new perspective on human presence in space by being the first to venture into new territories: he made the first spacewalk, helped to end the US/Soviet space confrontation by shaking hands with a NASA astronaut in orbit and gave form to his memories through his paintings.

Alexei Arkhipovich Leonov was born on 30 May 1934 in the small town of Listvyanka, near Lake Baikal in Siberia. The eighth of a family of nine, he soon showed his skill in mechanics by building himself a bicycle from spare parts. He was also a talented artist. During World War II he spent hours at the local hospital sketching soldiers, officers and battle scenes.

After the war, the Leonov family moved to the newly conquered city of Kaliningrad – the former Königsberg. Young Alexei started drawing seascapes of the Baltic and when he enrolled at the Academy of Arts in Riga in 1953 it seemed that he was all set for a career as an artist.

Surprisingly, on leaving the Academy he joined the Chuguyev Air Force School in Kharkov, Ukraine. In 1957 he has graduated from the Air Force School with the qualification of Fighter pilot, test pilot and also as the parachute instructor. During this time he did not forsake his art but continued his studies by attending evening classes. A keen sportsman, he also practiced fencing, volley ball and sailing.

As an athletic and agile parachutist, as well as a competent pilot, Leonov soon came to the attention of a screening commission who told him he was under consideration for ‘something new and very, very difficult’.

In March 1960 he was selected for the first corps of Soviet cosmonauts with 19 others, including Gagarin. Originally he was considered as a pilot for Vostok 1 but then became back-up for Vostok 5. His goals were much higher however, he made no mystery of the fact that he wanted to be the first man on the Moon.

First spacewalk
Finally he was selected to fly on Voskhod 2, a two-seat version of Vostok, with Pavel Belyayev. The main objective of the mission was to carry out a spacewalk before the US astronauts could do so from their new Gemini capsule. The mission was launched on 18 March 1965. Since the Voskhod could not be depressurised, an inflatable airlock was deployed from the hatch. On the second orbit, Leonov entered the airlock to leave the spacecraft and venture outside.

Alexei Leonov passed away in October 2019.