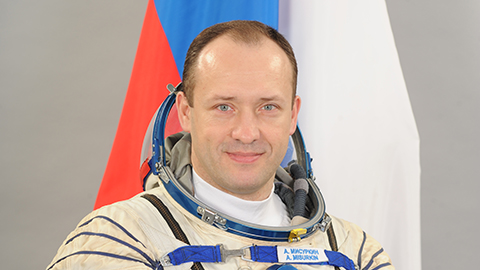 116 astronaut Russia (USSR) and 531 th cosmonaut of the world. He made two space flights to the International space station (ISS) on spacecraft Soyuz TMA-08M and Soyuz MS-06. Member of ISS-35/ISS-36, ISS-53, ISS-54 expedition commander. Spent in space 334 days 11 hours 29 minutes. He made four spacewalks, the total duration of work in outer space was 28 hours 13 minutes. Air force reserve Lieutenant Colonel. Pilot-instructor of the 1st class, has more than 1000 flight hours. Hero of the Russian Federation, pilot-cosmonaut of the Russian Federation. Honorary citizen of the city of Orel.

Education: Armavir Military Aviation Institute (with honors) 1999.
Work experience:
– 1999 – 2006 Pilot-instructor, aviation component commander in Krasnodar Military Aviation Institute.
– 2006 – 2009 Enrolled in a cosmonaut team. Took a course of general space training. Qualified by the state examination committee as a test cosmonaut.
– 29.03.2013-11.09.2013 Had the first space flight as a flight engineer. During the flight for the first time in modern history a scheme of rapid rendez-vouz and docking with the ISS was practised.
– 13.09.2017 – 28.02.2018 Had the second space flight as the commander of spaceship Soyuz MS-06 crew. Was the commander of Expedition 54. During the space flight together with Anton Shkaplerov performed one spacewalk which lasted 8 hours and 12 minutes and broke the record of staying in outer space among Russian cosmonauts.
Currently:
Head of the group of test instructor-cosmonauts, the first class test cosmonaut. Alexander Misurkin is the president of the Badminton Federation of the Oryol region which was established at his initiative in 2017 (badminton57.ru). And in three and a half months after returning from the space flight he set an unofficial world record – he played badminton with all people who wanted to for 24 hours non-stop.
https://amisurkin.com