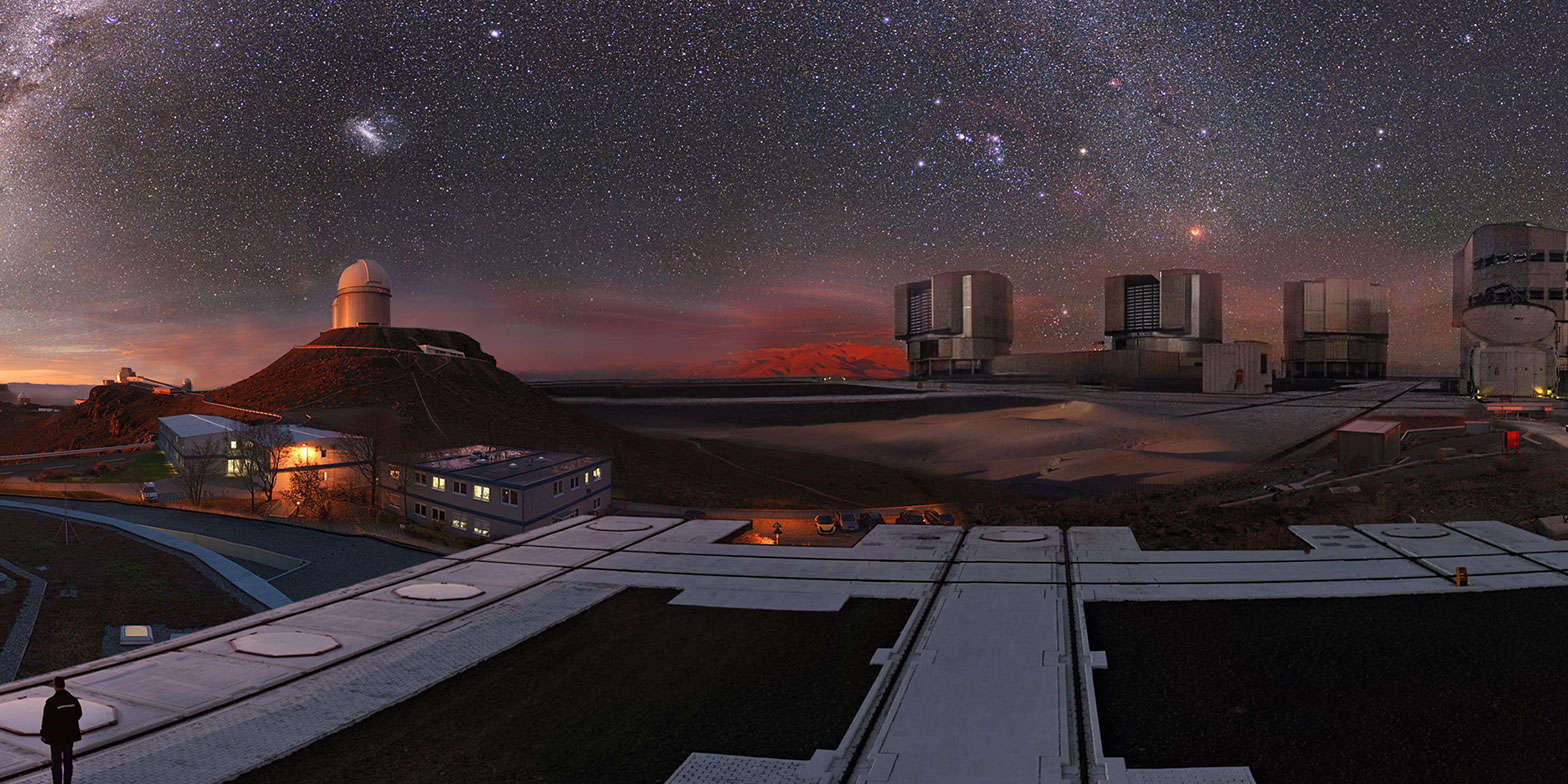 Astronomy is often described as the oldest science and there can be no doubt that a view towards the majestic Milky Way band of stars – as it stretches across the sky on a clear night – must have been an awe-inspiring sight to people of all ages and cultures. Today, astronomy stands out as one of the most modern and dynamic sciences, using some of the most advanced technologies and sophisticated techniques available to scientists. And these are exciting times for astronomy: technology now allows us to study objects at the far edge of the Universe and to detect evidence for planets around other stars. We can begin to answer a fundamental question that fascinates every one of us: are we alone in the Universe?

The European Southern Observatory (ESO) is the pre-eminent intergovernmental science and technology organisation in astronomy. It carries out an ambitious programme focused on the design, construction and operation of powerful ground-based observing facilities for astronomy to enable important scientific discoveries. ESO also plays a leading role in promoting and organising cooperation in astronomical research.

ESO operates three unique world-class observing sites in the Atacama Desert region of Chile: La Silla, Paranal and Chajnantor. ESO’s first site is at La Silla, a 2400 m high mountain 600 km north of Santiago de Chile. It is equipped with several optical telescopes with mirror diameters of up to 3.6 metres. The 3.5-metre New Technology Telescope broke new ground for telescope engineering and design and was the first in the world to have a computer-controlled main mirror, a technology developed at ESO and now applied to most of the world’s current large telescopes. The ESO 3.6-metre telescope is now home to the world’s foremost extrasolar planet hunter: HARPS (High Accuracy Radial velocity Planet Searcher), a spectrograph with unrivalled precision.

While La Silla remains at the forefront of astronomy, and is still the second most scientifically productive in ground-based astronomy, the 2600 m high Paranal site with the Very Large Telescope array (VLT) is the flagship facility of European astronomy. Paranal is situated about 130 km south of Antofagasta in Chile, 12 km inland from the Pacific coast in one of the driest areas in the world. Scientific operations began in 1999 and have resulted in many extremely successful research programmes.

The VLT is a most unusual telescope, based on the latest technology. It is not just one, but an array of four “Unit Telescopes”, each with a main mirror of 8.2 metres in diameter. With one such telescope, images of celestial objects as faint as magnitude 30 have been obtained in a one-hour exposure. This corresponds to seeing objects that are four billion times fainter than those seen with the naked eye.

Each year, about 2000 proposals are made for the use of ESO telescopes, requesting between four and six times more nights than are available. ESO is the most productive astronomical observatory in the world, which annually results in many peer-reviewed publications: in 2013 alone, over 840 refereed papers based on ESO data were published. Moreover, research articles based on VLT data are in the mean quoted twice as often as the average. The very high efficiency of the ESO’s “science machines” now generates huge amounts of data at a very high rate. These are stored in a permanent Science Archive Facility at ESO headquarters. The archive now contains more than 1.5 million images or spectra with a total volume of about 65 terabytes (65,000,000,000,000 bytes) of data. This corresponds to the content of about 30 million books of 1000 pages each; they would occupy more than 1000 kilometres of bookshelves!

The Atacama Large Millimeter/submillimeter Array (ALMA), the largest ground-based astronomy project in existence, is a revolutionary facility for world astronomy. ALMA is comprised of an array of 66 giant 12-metre and 7-metre diameter antennas observing at millimetre and submillimetre wavelengths. ALMA started scientific observations in 2011 and was inaugurated in 2013. ALMA is located on the high altitude Llano de Chajnantor, at 5000 m elevation — one of the highest astronomical observatory sites in the world. ALMA is a partnership of ESO (representing its Member States), NSF (USA) and NINS (Japan), together with NRC (Canada), NSC and ASIAA (Taiwan), and KASI (South Korea), in cooperation with the Republic of Chile. The Joint ALMA Observatory is operated by ESO, AUI/NRAO and NAOJ.

The Chajnantor site is also home to the 12-metre APEX millimetre and submillimetre telescope, operated by ESO on behalf of the Onsala Space Observatory, the Max Planck Institute for Radio Astronomy and ESO itself.

The next step beyond the VLT is to build the European Extremely Large optical/infrared Telescope (E-ELT) with a 39-metre primary mirror. The E-ELT will be “the world’s biggest eye on the sky” — the largest optical/near-infrared telescope in the world. The E-ELT will address many of the most pressing unsolved questions in astronomy. It may, eventually, revolutionise our perception of the Universe, much as Galileo’s telescope did, 400 years ago. The green light for E-ELT construction was given in late 2014, with first light planned for 2024.

The ESO Headquarters are located in Garching, near Munich, Germany. This is the scientific, technical and administrative centre of ESO where technical development programmes are carried out to provide the observatories with the most advanced instruments.

The Lagrange Laboratory of the Côte d’Azur Observatory (OCA)