Why are we supporting Asteroid Day? 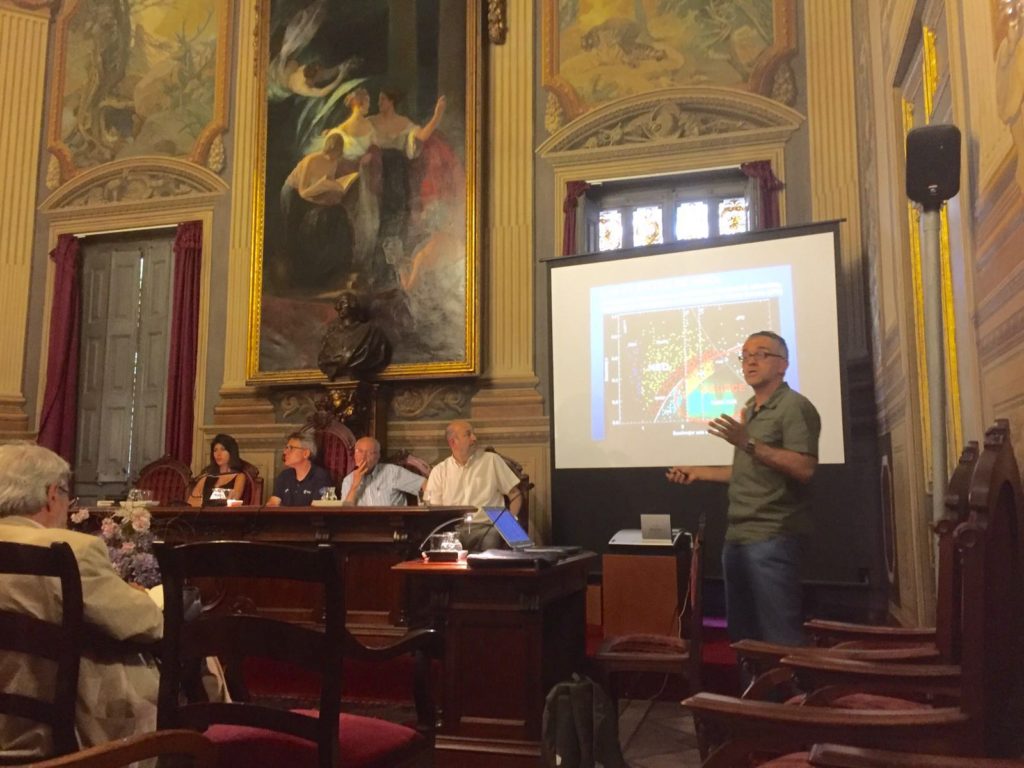 Why are we supporting Asteroid Day?

IT IS ABOUT POPULARIZING ASTEROID SCIENCE AND IMPACT HAZARD

Asteroid Day is a global movement where people from around the world come together to give awareness of asteroids to the society. Thus, the aim of this annual ephemerid is to learn about asteroids, from the threat they represent to our Planet, to the study of these amazing bodies that can provide the clues for understanding the Solar System origin and evolution. Besides, recently, there is another branch that starts to be considered, which is mining mineral resources in asteroids, for example Platinum Group Elements (PGEs), as well as water for human life supply in space exploration. From the Institute of Space Sciences (IEEC-CSIC) in Barcelona we are dealing with the study of the physico-chemical properties and the dynamic origin of meteorites, our available asteroid-forming materials, to contribute to answer some of the open questions on these issues.

Our implication in the Asteroid Day movement started in 2015 with our involvement in the organization of a Barcelona double event: a scientific workshop dealing with hot topics in impact hazard, and an outreach talk given by Spanish astronaut Pedro Duque. These activities took place respectively in our research institute and in the Parc de Recerca de la Universitat Aut noma de Barcelona (UAB). As a significant product of the 2015 scientific encounter, this year Springer will release a proceedings book titled Assessment and Mitigation of Asteroid Impact Hazards edited by J.M. Trigo-Rodr guez, Maria Gritsevich and Herbert Palme and to be published in the Astrophysics and Space Science Proceedings Series.

Why are we committed to celebrate this event every June 30th? Simply because we want to put a key reminder in our agenda: the anniversary of the Tunguska event, the largest contemporary asteroid impact recorded so far, which occurred in 1908 and devastated over 2000 km 2 of Siberian taiga. We are exposed to asteroid hazard as many other atmospheric explosions have been recorded since then. We now probably care more about this hazard because we start to be conscious: instrument sensitivity to detect them has improved considerably over the last decades, using different techniques. Also our ability to detect them has significantly increased. Telescopic surveys have achieved a quite complete database of Near Earth Asteroids (NEAs) up to sizes larger than about 300 meters, and are constraining the population of bodies that suppose a direct risk to us. So far 1,706 Potentially Hazardous Asteroids (PHAs) have been discovered, being asteroids experiencing close approaches to the Earth and hence that are potentially threatening our planet. Unfortunately, this number only represents a small percent of the total number of objects that can strike Earth. Indeed, Earth-based surveys are not able to detect most bodies in determinate entry geometries (e.g. towards the direction of the Sun), and we still miss part of the high-inclination population. These are factors causing that some asteroids or extinct comets experiencing close approaches to Earth are discovered with just few weeks of margin. All these are reasons to claim for a dedicated infrared space telescope that can deal with the challenging properties of these bodies: low reflectivity, and larger impact velocities. In front of this, Asteroid Day claims people from all over the world to discuss and debate this important issue in order to rise the awareness about asteroid impacts.

With events like Chelyabinsk (~20 m diameter, 15th February 2013), where more than 1200 people were injured, it was demonstrated the significant power of a relatively small asteroid impact, and the big danger associated with its shock wave. Although statistics about asteroid size impacts in specific time scales are not clear since we have a short historic memory, it is expected that a Chelyabinsk-class impact happens few times per century.

Our research group has also identified that some PHAs can be sources of meter-sized projectiles, probably as consequence of the disruption of their weak structures that are characteristic of rubble piles during close approaches to the terrestrial planets. The success of the Stardust NASA mission to sample materials from comet 81P/Wild 2 promoted the development of space missions addressed to the exploration and sample return of minor bodies. The golden age of the exploration of asteroids has probably started with Hayabusa (JAXA) mission to asteroid 25143 Itokawa who was not only a great scientific achievement to understand rubble piles, but which also included successful sample return. That specific goal, bringing back to Earth pristine materials from undifferentiated bodies, will concentrate the efforts of the forthcoming Hayabusa 2 (JAXA) and OSIRIS-REx (NASA) missions addressed respectively to asteroids 162173 Ryugu and 101955 Bennu. Hopefully NASA and ESA will join soon efforts in the AIDA joint mission to binary asteroid 65803 Didymos. Such joint mission will test for the first time the kinetic impact techniques needed to deflect future asteroid close encounters with the Earth. Consequently, there is no doubt that we are living a new era in the exploration of Solar System minor bodies, and we want take part of this international movement. This year our contribution wants to popularize the AIDA mission in Spain, and our Barcelona event will include a round table about asteroid deflection techniques, and an open debate with the public after the invited conference describing AIDA by Michael K ppers (ESAC). We encourage you to join AD events worldwide for being part of this unique movement to save us from our grazing rocky neighbors. Really, it is time for action!

Outstanding participation across Chile for the second Asteroid Day