NASA’s OSIRIS-REx spacecraft is currently getting ready to scoop up a sample of asteroid Bennu. Last month, it managed to complete a partial dress rehearsal for its trip to the asteroid’s surface with great success!

The spacecraft has been orbiting Bennu since 2018 and is scheduled to retrieve a sample of the asteroid in four months and bring it back to Earth in 2023. On April 14th, OSIRIS-REx got closer than ever before to the asteroid’s surface during this rehearsal. 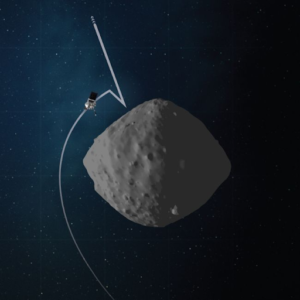 An artist’s rendition of the trajectory and configuration of the spacecraft during the rehearsal, Image credit: NASA/Goddard/University of Arizona

In addition to the successful approach, the spacecraft also practiced deploying its sampling arm, known as the Touch-And-Go Sample Acquisition Mechanism (TAGSAM). This method of sampling will significantly increase the likelihood of retrieving material from the Asteroid’s surface.

“This rehearsal let us verify flight system performance during the descent, particularly the autonomous update and execution of the Checkpoint burn,” Rich Burns, OSIRIS-REx project manager at NASA’s Goddard Space Flight Center in Maryland said in a statement. Burns praised that “executing this monumental milestone during this time of national crisis is a testament to the professionalism and focus of our team. It speaks volumes about their ‘can-do’ attitude and hopefully will serve as a bit of good news in these challenging times.”

It’s worth mentioning that this mission went without hiccups despite the fact that most NASA employees are working from home at the moment which makes this feat all the more impressive.

Congratulations to NASA and its employees on completing this milestone; we cannot wait to see what they can accomplish next!

This is an abridged version of the article “NASA’s OSIRIS-REx spacecraft aces asteroid-sampling dress rehearsal” from Space.com.

This post is from the Asteroid Day May newsletter. To read more from this issue, click here.