Stand by friends, I’m afraid we’re going to get into numbers here.  This is a subject where numbers reign supreme!  Happily there won’t be any real math here, but when you get into how many asteroids are out there (of interest), how frequently they are likely to impact Earth, what sizes do what amount of damage, and how much energy they release during an impact… you’re talking numbers!

When you’re talking how many asteroids, whether in the main asteroid belt or just the near-Earth objects (NEOs) it’s pretty much a meaningless question unless you specify some minimum size.  In the main asteroid belt between Mars and Jupiter scientists have estimated that there are over 750,000 asteroids greater then 1 kilometer in diameter.  There are millions of smaller ones and if one counts objects down to a few meters across I’d be surprised if we’re not talking billions.  That said, the total mass of all of the asteroids in the main belt taken together amount to less than the mass of the Earth’s moon.

But while these main belters are of great scientific interest, it is those that have been gravitationally diverted out of the main belt (largely by Jupiter) and whose perihelions (point of closest approach to the Sun) lie inside the Earth’s orbit that are the focus of planetary defense.  By way of comparison, among this NEO population there are approximately 1000 total with diameters greater than 1 kilometer.  At the smaller sizes the numbers increase rapidly until at the 40 meter diameter of the Tunguska impactor the population reaches about 1 million.  Here’s a simple table that gives you a sense of the size distribution of these guys.

That’s all well and good, you may say, but how can we possibly know how many are out there?  The answer to this critical question is that we don’t… precisely.  But we have excellent statistical approximations, and we think they’re pretty good.

How do we make such approximations?  Several ways, actually, and since they are independent of each other and come up with approximately the same numbers we’re pretty confident that we’ve got a good handle on the issue.

For example, the easiest method to grasp is to recognize that we have a neighbor called the Moon which has no atmosphere (nor has it ever) and therefore serves as a kind of tabula rasa for us here on Earth.  All of those impact craters on the Moon provide a graphic record of what’s flown through the Earth-Moon system since the Moon was formed back 4.5 billion years ago.  So knowing the sizes of craters that would be caused by the impact of various sizes of asteroids crashing into the Moon, we can count the craters and get a pretty good approximation of the frequency with which various sized objects come flying by.

Another method is illustrated by thinking of a farm (say 247 acres, or one square kilometer) that sits in mushroom country.  How would one estimate the total number of mushrooms on the farm?  Well if we counted the mushrooms in one typical square meter of the farm and multiplied by 1 million then we’d have a good approximation, right?  Obviously the devil is in the details since the soils vary across the farm, as does moisture, sunlight etc.  But you get the idea.  And shifting this up into space we know the equivalent volume of space we’ve looked at and not looked at… and knowing what we’ve found we can thereby approximate the total out there.  Devil in the details, but again, you get the idea.

A third, and interesting way to get a good approximation is to think of a big jar of full of beans.  How many beans?  That’s what we’re interested in.  So we pick out a handful, count them, make a little mark on them and throw them back in.  Now we shake the jar and randomize the contents.  Again we pick out a handful count the marked ones (re-discoveries), mark the unmarked ones, throw them back in and shake the jar.  And again, and again.  Each time the percentage of re-discoveries is higher and in fact ultimately approaches 100%.  The plotted curve of re-discoveries over time is well understood and from it we can approximate the total bean count quite accurately.  So it is with NEOs.

The result?  OK readers… we’re going to break into two groups here.  Those who are interested a simple answer to the question of how many objects of a given size are there out there and how frequently (on average) do they impact the Earth are referred to the table above.  (see you around).  Those interested in more detail and the latest & greatest “size, frequency” graphic… continue… and welcome aboard.

[Note:  I consider the table above in the you should know category; the details below in the you might want to know class.]

The diagram below is the now “classic” size-frequency chart produced by Alan Harris, who by my accounting is the world’s NEO demographer.  This latest version of it incorporates the latest data and analysis with most of the changes occurring in the NEO population at the smaller sizes (i.e. 40 meters and below). The paper, currently in press, is entitled Updated Population and Risk Assessment for Airbursts from Near-Earth Objects (NEOs), and authored by Mark Boslough, Peter Brown, and Alan Harris. 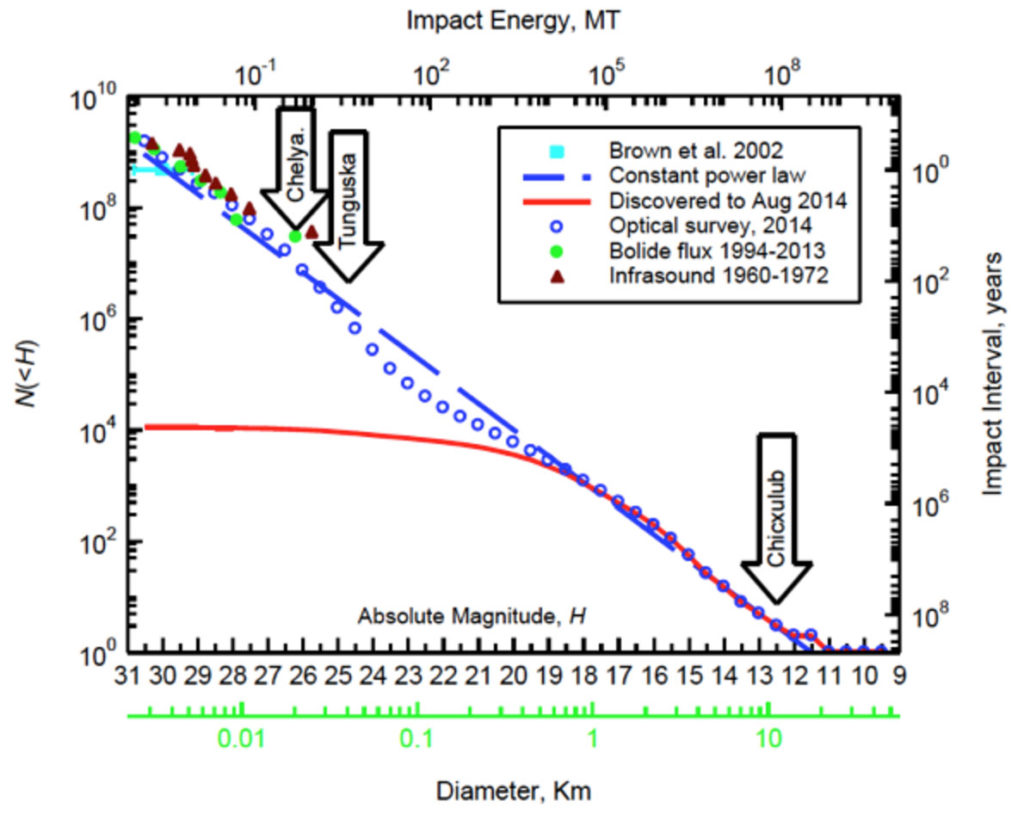 Now let me try to simplify this informative but messy graph somewhat.  Forget the text box in the upper right.  Look at only the straight dashed blue line, the small blue circles, and the red line.  As to the axes, forget the Absolute Magnitude, H axis at the bottom (unless you are an astronomer) and pay attention to the NEO diameter on the bottom.  So then this becomes a plot of NEO diameter (bottom) vs. the total number of NEOs out there (left), the frequency they impact (right), and the energy they deliver when they do (top).

The dashed blue line is (sort of) what scientists might expect for the distribution in nature.  The small blue circles are what we anticipate finding based on optical surveys to date.  You can see that in the middle sizes (say 30 – 600 meters) the anticipated population dips below the “expected” (the so-called inverse-power function line).  Conversely, at the small end of the spectrum the numbers we’re finding indicate a slightly higher than “expected” population.  And then the red line is simply the plot of those we’ve actually discovered to date and are now tracking.

So, for example, if you pick 1 km diameter asteroids, you go up from the 1 km green tick to the dotted blue line and then horizontally left to find that the population out there is ~ 1000 objects.  Go to the right axis and you’ll see that one of those would be expected to hit Earth (on average) once every 700,000 years.  And if you want to know (if it happens to be of average density and come in an average speed) what energy it would impact with you go to the top and find it would deliver ~60,000 million tons of TNT’s worth of BANG!

If you go up to the red line from the 1 km green tick and then left you’ll see we’ve already discovered about 1000 objects.  In other words, we’ve essentially discovered all of them out there.  Most important, we’re now monitoring and tracking them all!  (Actually, we have 962 of them in the database which we believe to be ~96% of the total out there.  See http://neo.jpl.nasa.gov/stats if you’re interested)  That’s the good news… we know almost where each one of these big guys is and we’re keeping track of them!

The bad (or worse anyway) news is that if you now go into the table at any smaller size the picture gets less rosy.  I.e. below ~ 1 km the red line of actual knowledge drops below the statistical expectation numbers (blue dots).  Figures, right?  The smaller they are the more of them there are out there and the harder they are to find.

So just to take an example at the lower end, say the 40-meter size of the Tunguska impactor, you’d go up to the dotted line and left to find there are about 1 million of those out there which would impact on average once every 400 years.  And, stopping at the red line and going to the left, that we only have about 10,000 of them in our tracking database!  That’s 1%!  Since these 40-meter guys are the ones that were referred to in a Congressional hearing just after the Chelyabinsk impact 2 years ago as “city killers”, you get the picture of why we planetary defense folk are concerned with upping the discovery rate for NEOs.

A perfectly legitimate way to state this situation is that, if we were to be hit by a 40-meter object tomorrow the chances are 99% that it would be a total surprise!  We would have no prior knowledge it was coming.  Relax (a little bit) though, in that the probability of that happening is only 1 in 146,000 (i.e. one day in 400 years)!  Still, this situation is why Don Yeomans is famed (among other things) for pointing out that the three most important things to attend to if you want to protect the Earth from NEO impacts is 1) find them early, 2) find them early, and 3) find them early.

OK Don, we’ve got the priority.

If the Chelyabinsk asteroid had hit the moon, what size crater would it have created?