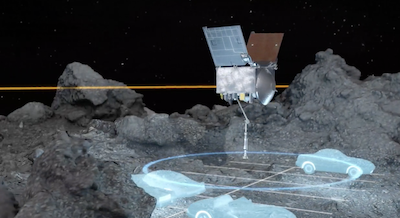 On 20 October, NASA’s OSIRIS-REx mission will attempt to collect samples from the surface of asteroid Bennu.

OSIRIS-REx stands for Origins, Spectral Interpretation, Resource Identification, Security-Regolith Explorer. It was launched on 16 September 2016 and arrived at its target asteroid, Bennu, in December 2018. Since that time it has been surveying Bennu, looking for a place to ‘land’ and take samples. Rather than landing properly on the surface, the mission controllers refer to the event as a ‘touch and go’ manoeuvre.

The spacecraft is equipped with a special instrument for collecting the samples. When this sampling mechanism touches Bennu, it will remain in contact for just  several seconds. During that time, it will fire a burst of pressurized nitrogen to disturb the loose material on the surface. As these rise up in the low gravity of the asteroid, the sampler will collect the dislodged material and stow it safely. The spacecraft will then back away into a safe orbit.

This daring manoeuvre offers a great opportunity to plan activities and to get people interested in the scientific exploration of asteroids and the things they can tell us about the formation of the solar system, maybe even of the origin of life on Earth.

But in these pandemic times, when gathering in groups should be avoided, it would be better to host virtual events or even competitions.

For Asteroid Day 2020, the Chilean Astronomy Foundation created the Asteroides Musicales (musical asteroids) contest. This great initiative invited participants to write a song and produce a music video about the subject of asteroids.

If you play a musical instrument, you could create a piece of music that captures the drama of the OSIRIS-REx mission. If you sing, your melody and lyrics could tell the story of the manoeuvre. If you are not comfortable composing your own melody, then write new lyrics to one of your favourite songs!

Why not involve your family too? Children love this kind of fun and you may just awaken a passion in them either for astronomy or music or both!

Check out the winners of the Chilean Astronomy Foundation’s music on the blog.

ARE ROCKS FROM ASTEROID VESTA HITCH-HIKING THROUGH SPACE ON ASTEROID BENNU?