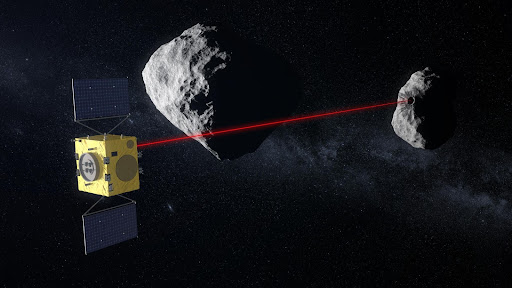 Learning Objective:
Learn what the main asteroid deflection methods are.

Overview:
Despite what is portrayed in Hollywood, there are many viable options to defend the Earth from asteroids. Learn about the top discussed asteroid deflection methods of today.

Specifics:
Asteroid impacts are the only preventable natural disaster. Unlike hurricanes, tornados, earthquakes or tsunamis, scientists have the ability to see large asteroids on a collision course for Earth much farther in advance.

For a planetary defense mission to be successful, it is important to know the properties of the asteroid such as its mass, size, trajectory and surface composition. It will also be necessary to know the effect and consequences of the chosen defense technique.

Kinetic Impactor – A projectile is launched to the asteroid and pointed in the right direction and with adequate speed, collides with its surface and changes its orbital period for a few minutes, enough to avoid a future collision with our planet. This technique will be tested by the Double Asteroid Redirection Test (DART) mission on the asteroid Didymos and its moon Dimorphos.

Gravitational Tractor – A spacecraft with a considerable mass deflects an asteroid just approaching it and lets the gravitational interaction act gradually and naturally, modifying the asteroid’s orbit.

Nuclear Blast – In this scenario, a nuclear device is sent to explode right next to an incoming asteroid in order to ‘push’ it off course. However, this is not the preferred solution as it could have a host of damaging after effects from the blast and since scientists can detect asteroids targeting Earth decades in advance, there are safer and more viable options.

Learn more about these techniques from Scientist Scott Manley here.

While the above techniques are the most viable options, scientists have also suggested laser ablation, painting asteroids white or even using the Sun.

Learn more about this subject by visiting these websites:
Defending the Earth from Asteroids on Asteroid Day LIVE 2021
Aftermath of an impact – Asteroid Impact Simulator (Purdue University)
DART Mission Homepage

Luxembourg’s SnT is training the professionals of the future