The ability to see an asteroid with the naked eye is something that varies from year to year, season to season. This year, many opportunities for asteroid viewing will present themselves. Learn about the five asteroids that will come close enough to earth for viewing in 2020, several of which will happen on or around Asteroid Day! Included are also ways to incorporate this kind of information into interesting and informative events and activities surrounding asteroids and Asteroid Day.

The following asteroids–all shining between the 8th and 10th magnitude–will have a minimum distance from the earth in 2020 meaning that observers should be able to see them with just binoculars or small telescopes. 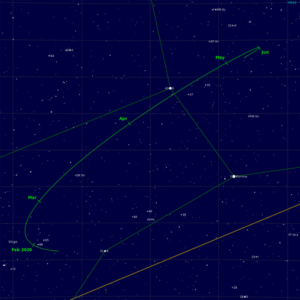 Asteroid 3 Juno’s trajectory in the sky in 2020. Its opposition will be on April 3

3 Juno – One of the first asteroids discovered, Juno was located in 1804 by German astronomer Karl Harding, earning its name in honor of the goddess of Roman mythology and wife of Jupiter. At over 230 km in diameter, it is one of the largest asteroids in the Main Belt. Juno will be visible in the night sky for about 10 days after the Equinox (early spring in the northern hemisphere and autumn in the southern hemisphere) or roughly April 3. Juno can be located in the constellation Virgo, shining between the 9th and 10th magnitude.

Pay attention to the next three asteroids whose oppositions are close to Asteroid Day; depending on your location you can see them on the same night! 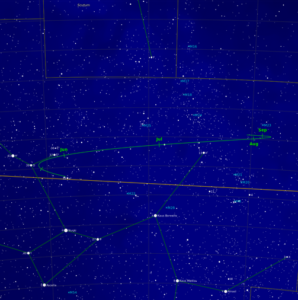 Asteroid Iris’ 2020 trajectory. In June it will ride the Big Dipper.

7 Iris – Discovered by British astronomer John Russell Hind in 1847, Iris also earned a mythology-inspired name from the Greek goddess of the rainbow. Iris will reach its best magnitude (between the 8th and 9th) on June 28, just two days before Asteroid Day. It can be located near the Big Dipper. 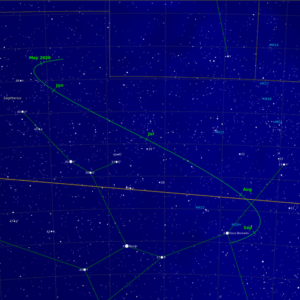 Future trajectory of asteroid Herculina in the sky. It will be in Sagittarius near Asteroid Day.

532 Herculina – Coming hot off the heels of Asteroid Day, asteroid Herculina will reach its closest Earth period on July 3rd. Discovered in 1904 by the German astronomer Max Wolf, Herculina is thought to have gotten its name from a female derivative of the famous Greek hero Hercules as the first asteroids were named with female names or female forms of character or place names. Herculina will be in the constellation of Sagittarius the Archer and will shine between the 9th and 10th magnitude. 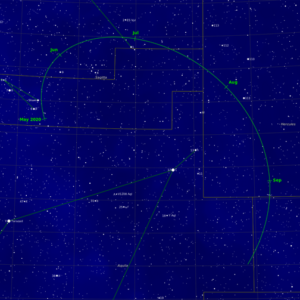 Asteroid Pallas trajectory in the sky for 2020. The main attraction for July.

2 Pallas – For many around the world, July is a time for vacation and what better way to relax than looking at the night sky for asteroids at night? Mid-July, look for the asteroid Pallas, the first discovered asteroid in history (Ceres was the first discovered asteroid but was promoted to dwarf planet in 2006). Discovered by German astronomer Heinrich Olbers in 1802, this asteroid is named in honor of the goddess Pallas Athena. Pallas will shine between the 9th and 10th magnitude and can be located between the Arrow (Sagitta) and the Fox (Vulpecula), two small constellations close to the Eagle and its main star Altair. 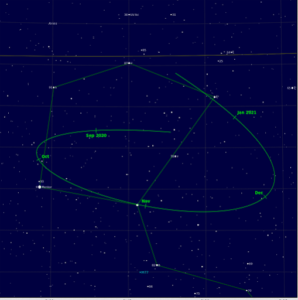 The path of the asteroid Flora in 2020. The brightest asteroid of the year.

8 Flora – Discovered by John Russell Hind just two months after the asteroid Iris in 1847, Flora is a tribute to the Latin goddess of flowers and gardens. It will be the brightest asteroid of the season thanks to several favorable factors such as its very reflective surface. About a week before its opposition on November 1st, Flora will reach the Perihelion, its closest point to the Sun, on October 25th. This will make the asteroid reach 8th magnitude, which can be observed in the constellation Cetus, the Whale.

This year of asteroid observation can prove educational for event organizers, students, and teachers. Use these asteroid viewing opportunities to spark conversation and activities such as:

Cheers to a good year of observations and great events!

Video Highlight: How Big Is an Asteroid?