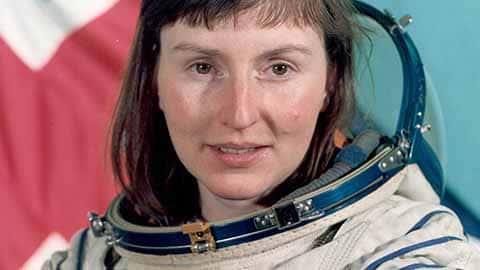 Sharman received a bachelor’s degree in chemistry from the University of Sheffield in 1984. After receiving a doctorate from Birbeck College, London, she worked first as an engineer in London and then as a chemist for Mars Confectionery Ltd.

In November 1989 she responded to a radio advertisement for astronauts and was selected from more than 13,000 applicants to be part of Project Juno, a commercial British cosmonaut mission. She underwent 18 months of rigorous training at the Yury Gagarin Cosmonaut Training Centre at Star City, Russia. The project was nearly called off because the Juno consortium could not raise the required funding. The mission was able to proceed with Soviet money; however, the British experiments were limited owing to budgetary concerns.

Sharman finally launched into space on May 18, 1991, as a research cosmonaut on board Soyuz TM-12 with two Soviet cosmonauts, commander Anatoly Artsebarsky and flight engineer Sergey Krikalyov.Soyuz TM-12 docked with the space station Mir on May 20. The mission lasted nearly eight days, during which time Sharman conducted medical and agricultural tests. She also communicated with British schoolchildren on the radio. Sharman returned to Earth aboard Soyuz TM-11 on May 26.

Sharman was on the short list of candidates when the European Space Agency selected astronauts in 1992 and 1998. However, she was not selected in the final astronaut groups. She was made an Officer of the Order of the British Empire in 1992.