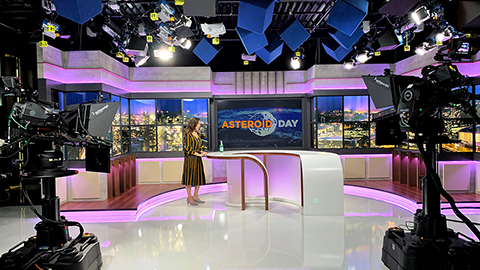 LUXEMBOURG, 24 June 2021 /PRNewswire/ — The Asteroid Foundation’s annual Asteroid Day LIVE programme premiers Wednesday 30 June 2021 at 18:00 CET. With the help of leading experts, Asteroid Day Co-founder Dr. Brian May and the most engaging voices in science communications from around the world, the five hour programme will bring the solar system’s smallest worlds to vivid life for audiences of all ages and backgrounds.

There can be no mistake, interest in asteroids has never been greater. In the next three years alone, five new asteroid missions will be launched by NASA and ESA. Asteroid Day LIVE will explore this explosion of interest across five hours of new content that will answer everything from the most fundamental questions a beginner may have about asteroids, to the questions that tantalise the world’s leading researchers.

Asteroid Day LIVE 2021 is split into four distinct segments. The first will explore the titanic task of discovering and tracking the millions of asteroids that circle the Sun; the second will discuss the scientific work that allows us to investigate the true – and often surprising – nature of the asteroids. Segment three is dedicated to the rapid advances that are being made in how to defend our planet from potentially hazardous asteroids; and the final segment looks to the exciting role asteroids may play in the future exploration of space, and the creation of an ‘in space’ economy.

The programme focuses on telling the remarkable stories of asteroids and the people that research them. The show is moderated by leaders of the field, such as Mary Lynne Dittmar of Axiom Space, and expert science communicators such as astronaut Tom Jones and Lucie Green from University College London.

The Planetary Society and Asteroid Foundation have co-produced a new video series titled ‘Meet the Asteroids’ that will premiere during Asteroid Day LIVE. Each specially produced video will highlight  a famous asteroid’s unique characteristics and back story. Taken together this series demonstrates the remarkable diversity of asteroids and explains the fascination that now surrounds their study.

And at the heart of it all is the original purpose of Asteroid Day: to raise awareness that one day we will need to deflect an asteroid away from our planet. Through hard work and dedication, the global asteroid community is working to make this possible – and that puts the asteroid hazard in a class of its own, because uniquely among the natural disasters, asteroid impacts are preventable.

“Let’s all keep aware of the significance of Asteroid Day. Asteroids are still out there and we still don’t know all of them, so we need to be circumspect. We need to keep doing the research to safeguard the future of this planet, for our children and our grandchildren. Let’s keep Asteroid Day in mind. I’m very proud to be part of it” says Dr. Brian May.

About Asteroid Day:
Asteroid Day is held on 30 June each year to mark the date of Earth’s largest asteroid impact in recorded history, the Tunguska, Siberia event. Asteroid Day was co-founded by astrophysicist and famed musician Dr Brian May of the rock group Queen; Apollo 9 Astronaut Rusty Schweickart; Filmmaker Grig Richters; and B612 Foundation President Danica Remy, to educate the public about the importance of asteroids in our history, and the role they play in the solar system. In 2016, prompted by the leadership of the Association of Space Explorers (ASE), the United Nations declared Asteroid Day to be a global day of education to raise awareness and promote knowledge in the general public about asteroids. Thousands of independently-organised events have taken place around the globe, encompassing 125 of the world’s 195 countries.

A Media Kit including quotes, photos, video and B-Roll video is available in the Asteroid Day Newsroom. Photos from previous Asteroid Day events in Luxembourg are available on Flickr.